The plumber did not arrive on time. Later I found out he'd been fishing in Plantation Lake, that place near Kingswood with the wooden shack, boats for hire and nasty looking employees that always gave me the shivers.

Luckily I managed to run the hot taps and circumvented a disaster with the overflow. Called in sick so I could monitor the situation, spent most of the time going between the bathroom, tv and excercise bike.

Tom, the plumber never did fix the problem. He drowned, his line tangled with something the few available witnesses described as 'unexplainable to identify'.

I sit high in the tree above the water. Watching. Bapa sits in his little green boat rocking gently in the water. The sight is a familiar one for me. I have been watching Bapa fish and gather since I could climb the tree. I close my eyes and listen. Bapa's voice floats through the warm sticky air and up to my perch in the tree. His voice is deep, warm, and smooth just like the water. when he is in his boat, I don't worry about him. Mama died when I was born and most of the time it...

An American Setting by mroshaugh

swallowed by the water flowers at last
the canoe breathed across the swamp
I found the roots of an ancient oak
felled by Paul Bunyan
shed on by the ox
and dove,
a dove falling into the light,
to the tree's top,
waving in the murky green,
strange fish like oxen
strange waters
strange trees
the dove and the ancient oak 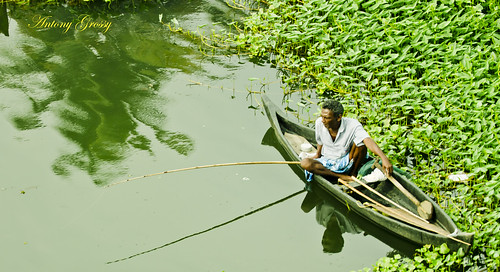 Image by AntoGros:
Write your own story to this prompt Read 4 stories
Originally displayed on:
April 02, 2012