Victoria and her sister Elizabeth spent their Sundays in the shopping district of their small town, on what they called their "promenade," saying the word in the closest thing they could affect to a french accent.

They would start in cafes and sip teas or coffees, nibbling shortbread, or butter cookies. They would each attempt to look both beautiful but also very bored, and would study each other for comparison later on.

When their cups were empty, they would walk, slowly, and purposefully along the narrow cobblestone streets. Looking in the window display of the second-hand and conscription stores and imagining, wishing they were staring at the haute-couture boutiques of Paris or Versailles.

They did this every Sunday until Victoria came down with consumption and could not longer get out of bed. 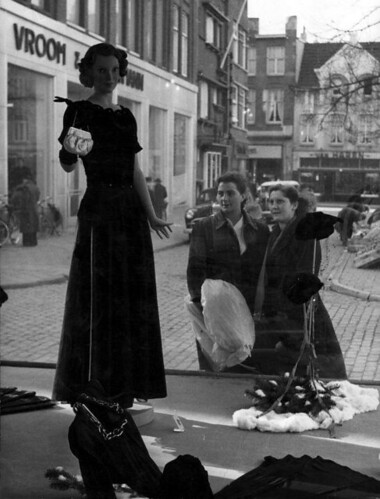 Image by Nationaal Archief:
Prompt suggested by Galen
Write your own story to this prompt Read 13 stories