The Birthday Party by rebeccaebrown

She hated kids' parties. She had had to be blackmailed into taking her niece to this one, and it was only because she couldn't stand Lucy looking at her with such disappointment in her great big eyes that she'd caved. Lucy had the guilt trip thing nailed, even at four years old.
So she'd promised herself a drink afterwards to blot out the horror, strapped on the most unsuitable shoes she could think of for a party, put her make up on and braved the church hall.
It was worse than she'd imagined. What, had they invited 100 little monsters to run around for three hours, covered in cake and lemonade and who-knew-what else? She winced several times as snotty noses and sticky fingers came dangerously close to her suede top. Lucy looked at her a few times, her little face falling every time.
Eventually Lucy came up to her, grabbed her hand and pulled her into the other room. She grumbled all the way in, no idea what new torture Lucy wanted to inflict on her, and nearly ran the other way when she saw it. A huge, brightly coloured, bouncy castle.
"No." she said flatly. "No way Luce." Lucy's lip quivered and a tear drop gathered. She sighed, and pulled her shoes off.
Bounce once. Bounce twice. Bounce a little higher. Suddenly she was flying, drinks forgotten. She was 4 years old again. 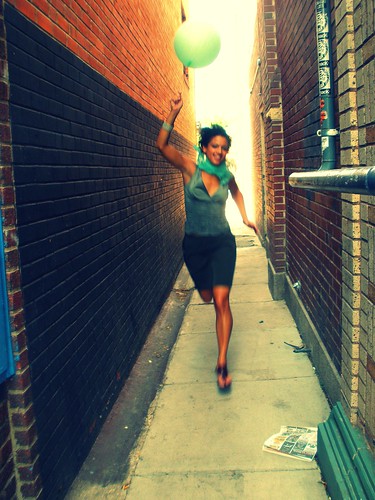