Under a cold moon by rebeccaebrown

There had been a time when he could have named all the seas on the moon, and pointed them out. That seemed to be in another life. He curled into a ball as tight as he could go and tried to ignore the pain in his leg and the weakness stealing up his body. He tried to ignore the cold seizing his limbs, and instead recited lists of constellations, dragging them from the pits of his memory. He even managed to get a couple of the moon's names. He uncurled one hand and the claw-like fingers groped blindly for his wallet. Had it really been worth it? All he'd had in his wallet was a fiver, and his medallion from Alice, but he'd been so irritated by the smug little... It hadn't been worth it, he knew that now. They'd taken the five pound note, and thrown the wallet aside like so much rubbish. The medallion fell out of the wallet and slipped between his fingers. As he gazed at the moon, whispering the names of the seas, he graspd the medallion

Agh. Ok, should have been a full stop there. Picky picky. 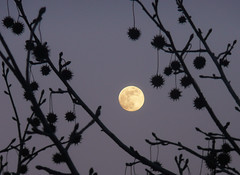 Image by JoiseyShowaa:
Prompt suggested by Galen
Write your own story to this prompt Read 9 stories