All he had to his name was this park bench, and not even that.

As he sat and gazed off into the distance, he contemplated his fate. He'd lost his job, then his home, then his family. Nothing was left to him, not even his body that lay six feet under rotting in a pauper's grave. His spirit sat on the bench that the shelter had dedicated to his memory. Suicide had not ended his suffering. Dispossessed of everything he had held dear, he contemplated getting his life back.

His ex-wife stood looking at the bench, at his name burned into its polished wood. Did she regret leaving him? Did she wish they were still together? In a burst of inspiration, David realized how they could both have what they craved - or at least the life that he craved. He tensed and leapt into the body of his former love. Finally, he had accomplished in death what he had failed to in life.

He possessed her utterly.

Raerae about 8 years ago

Was your prompt an elderly man with glasses and a cane? I wrote a story from that prompt that could be the prequel to this one (with a little tweaking). I saw this link on inkslingers, Mike reddy. This was uncanny. Lol
My story is What? Bc I had no idea what to title it.

The prompt was a man in shadow on a park bench, looking off into the distance. :) 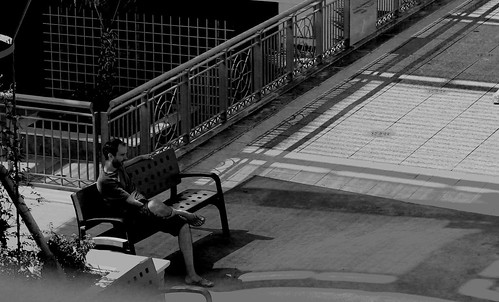 Image by Leshaines123:
Write your own story to this prompt Read 6 stories