He watched from a distance, hidden behind a bush. The two tigers snarled at each other, circling around, judging each other's strengths, weaknesses. His camera was held up to his eye, and the only part of his body were his fingers: depressing the shutter, muffling the click, repeat. They were magnificent creatures and couldn't have been more than three years old. Most likely this was their first time encountering another, hostile male. This would be the fight where they proved their worth. Maybe they were fighting over a girl, the age-old battle. But msot likely it was territory: this is mine, this is yours. They were so much like humans it was uncanny. He remembered his brother.
"Hey, this is mine!" His brotehr had merely smiled and flicked the yo-yo back and forth on his finger, cheeky and insolent. Desperately, he had tried to grab it from him, but his brother was too fast, too smart. He had merely been a chubby toddler.
The tigers: had they been brothers once, too? It was possible this was only a childish fight, a practice run, as it were, but it seemed unlikely. The air was tense between them with barely concelaed fury, not with childish play. It was sad, how people fell out.
"I hate you." He had screamed it at his brother from the door of his apartment. "I hate you." Then he had ran, far, far away. He had just wanted to get away from him. His brother had hurt him too many times already.
One tiger 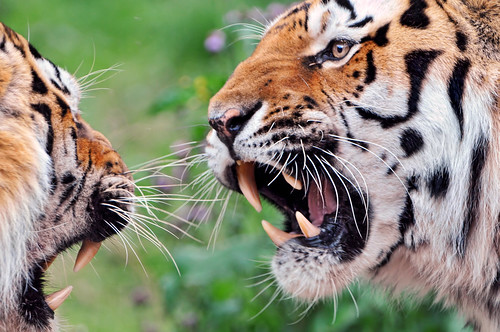