The border. He had. To find. The border. He'd made this trip a hundred times before and each time the damn thing moved. When he thought of it - if he thought of it at all - he imagined it as some kind of mystical shimmering veil. Except you couldn't actually see it. Couldn't map it. It might be there with the next step or it could take a thousand more and he never knew which it would be. He was pretty sure he'd been walking straight for it but... had he just been circling? Was he even heading in the right direction?

The first time he'd crossed it had been an accident. He'd just been walking. Uneasy - sure, but not really aware of where he was. He'd sensed more than seen when he crossed. He hadn't even realized, that first time, that if he hadn't found it he would have died on that side. He knew it now, though. To find the crossing was to live.

If he was lucky, some faint sense of it would send him jogging across with a shout, equal parts joy and giddy relief, calling up friends who didn't even realize he'd been gone. More often though, he stumbled across it by accident, so tired he could only sink to his knees and pray this would be the last time he'd make this trip. Sure that it wouldn't be.

Today? Today he was lost and he knew it. It might be a single step away but it just didn't matter anymore. In fact, maybe he'd forgotten it was even out there somewhere. The light was fading now and with one final glance at his wrist, he curled up into a ball and felt the last of his time slip away, drop by drop. 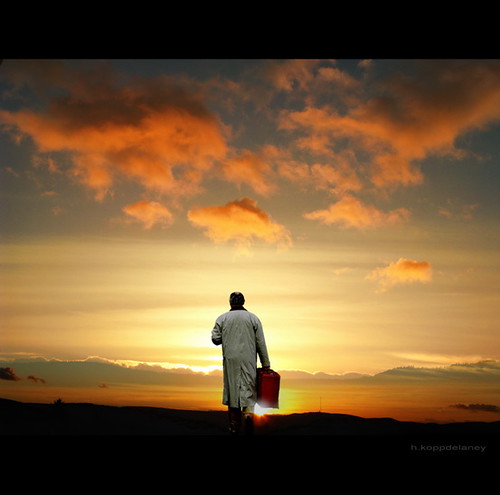 Image by h.koppdelaney:
Prompt suggested by Galen
Write your own story to this prompt Read 11 stories