How did we lose it in the first place? I don't dare say it out loud, because they'll blame me.

We've been at this for hours and still we haven't found it.

I was told to put it someplace safe. Someplace it wouldn't be lost.

But I did. Well, maybe not technically, more like made it impossible to get to. How was I supposed to know they were going to pick this up and ship it out overseas as donations. I blame my crazy Aunt Ida, that woman has a bad habit of promising things to the wrong people, which is why she ended marrying that mob boss. Not sure this is going to fly.

My brother is going to kill me, he's not even looking at me, muttering curses as he picks up another box and heaves it to someone else. Hell what did he expect? Waiting for the right time is no way to keep a girl waiting.

I rip open the rough cardboard, the smell of damp paper making me sneeze.

I am supposed to be the best man, but if I don't find the ring it's not going to happen. I think he's already written me off.

I wipe the sweat dampening my brow and fish in my pocket for a smoke.

A hard box is there. Small. Velvet.

The relief is instant it's as if I couldn't breath.

But I won't tell him yet.... he needs to be too tired to deck me one. I'm his brother, but that's not going to stop him.

Writer of Urban Fantasy and romance, with a love for coffee, kettle bells and rain. 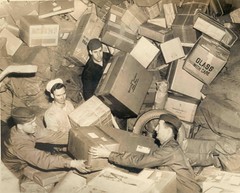 Image by Smithsonian Institution:
Prompt suggested by Galen
Write your own story to this prompt Read 8 stories