We were to meet in the gallery. The glass one, stone fronted with tiles. It is an old place, no longer fashionable. It looks out onto a street where buses no longer run and rubble fills the roads. He said he had a message to give me. The way it was said, it did not imply that the message was from him, but only that he was a messenger, of the most unwilling kind. What inconvenience it must cause you, I might have argued, to have to meet up with me in such way. What a task your people as of you? It has been how many years since I have laid eyes on him. At least ten, probably more. He has undoubtably changed, and he would likely say the same of me, though I look no difference to myself when I think to gaze into a mirror, which is not often. Other things have changed, of course. Now my faction is in power, and his is....but he would still bring me a message. Peace might still be won. The rain slicks the windows as I arrive. I have done my best to arrive alone, evading the insistence and concert -- studied or true, i am never sure -- of the guards I have been assigned. They would not have me walk out alone, among the people, where any sharp thing might be used as a weapon. We, my kind, are no longer free to walk unimpeded through the streets. Both because we are in danger but also because we endanger others -- bomb blasts have become popular in recent years and are seldom pinpointed or efficient. Death has become fact but still one people try to avoid, when they can. (That the message he brings me is of such a nature -- a dagger in the dark -- such is a thing I cannot pretend never occurred to me. But maybe I meet that end, one of so many -- all similar in nature -- that might be offered.) The door to the gallery is locked. This is not as surprising as perhaps it should be. A street that is abandoned does not mean that it's a street unloved. There are fine paintings no doubt within, those secured to their walls with the old technology, and so not easily transported. Someone once cared for them, even if that someone is long gone. But I have ways to enter, that is but one talent that has brought me to where I am. My 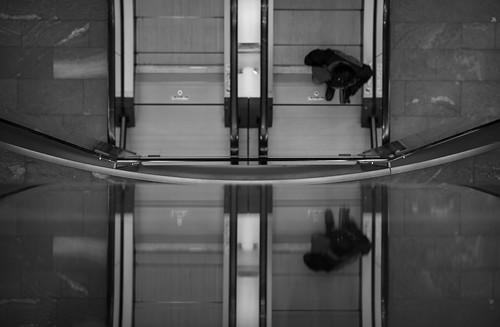 Image by kewlscrn:
Write your own story to this prompt Read 8 stories