The convention awaits, but yet she can't bring herself to walk up the escalator. She should, she knows that. She should race up the moving stairs to reach her goal all the sooner, but it seems undignified somehow. Sure, her Leia buns are mere headphones, and her white satin bathrobe a poor approximation of the space princess's Senatorial garb, but her persona is the most important part of the costume. For tonight, she is Leia. She adjusts the black-rimmed monstrosity that sits upon her nose, clutches her tickets, and steels herself for the trial before her. If only she carried a lightsaber...but no, theater policy forbade that part of her fantasy. Still, Leia has midichlorians enough to fight a Galactic Empire, so she can face an overzealous crowd on opening night. After all, she is the child of Vader as well as Amidala, and she's fully prepared to force-choke the bejesus out of anyone who blocks her seat tonight. 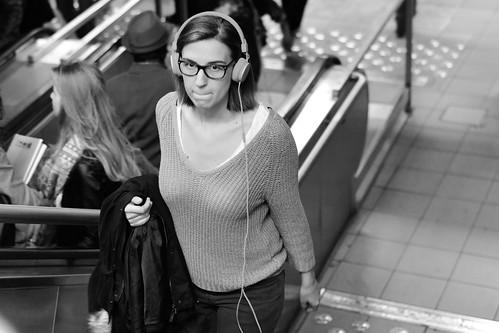 Image by ekidreki:
Write your own story to this prompt Read 1 stories