The day it burned down my mother locked herself in her room and wouldn't take any visitors.

Her memories of him, that Winter in 1973 where they sat on the front steps of the chapel and watched bikes and cars drive by... The day they got married; January 19, 1973. When they blew off the after-wedding limo to watch the snow fall, later to hitchhike to their own reception.

It was just like her, my mother, to leave what was normal for a single moment of something crazy - I guess it made her feel alive.

Now the chapel had burned to the grown, and Brown, (his real name was Edward, but his hair and eyes were brown, my mother's way of nick-naming people, that is, by their features) was gone with them, he was not my father, but her love for him had never faded. 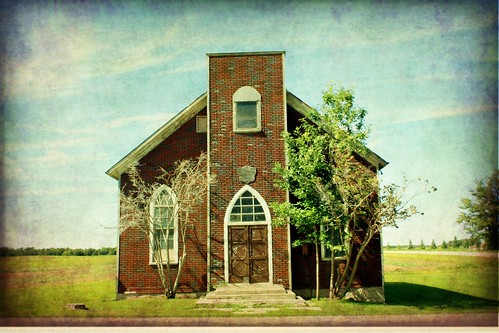 Image by Robb North:
Prompt suggested by lekvarlover
Write your own story to this prompt Read 5 stories