Josh ground his teeth in frustration. The other kids on the playground were really getting to be a nuisance.

He'd heard all of their excuses as to why his team always won the soccer games. He'd been held back a year, he was bigger and stronger, he'd been to some special training camp, he was a mutant, etc. They kept making excuses, saying that he wasn't playing fair, that he fouled, and so forth, even though he was always careful not to. They just couldn't deal with the fact that he was better than them.

But now it was really getting out of hand.

"This is stupid," he complained. "There's no way I can score now. You've just made the game stupidly one-sided."

He was referring, of course, to the new goal Randy's parents had bought them. The one with bars in the back that prevent the ball from getting through.

"It looks fair to me," argued Randy insolently.

"But there's no way I can score," Josh continued. "Not when you put the opening against the wall and have THREE GOALIES." 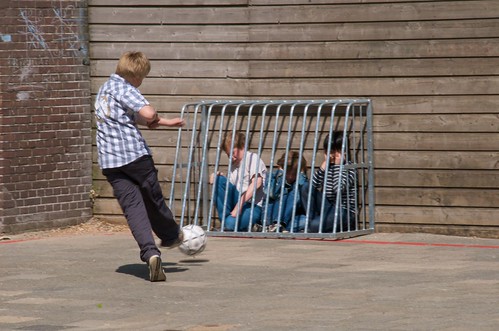