Sometimes, the best cure for loneliness is to actually be alone. Which is actually kind of hard to do, considering there are something like 6 bills people on the planet. You have to actually try.

Alone is different from lonely. Alone is a choice. Lonely is a sickness. My sickness has lasted two years, six months, eleven days, and I'm to the point where I must get better, or die. So I put on my black "fuck off" jacket, and put my headphones in my ears, and I made a choice to be alone. And I walked. I walked all...

There was originally only one photograph. Now there were two. Well, two halves. Incomplete. Roughly cut down the middle of the bay, neatly bisecting the bench. One was lightly discarded in a pile of "Things to do/sort."

The other was folded and refolded and bent again, then sat in a wallet. Strangely, the one that was thrown aside was the more loved. It showed regret. It showed hope. It showed Faith.

The tattered half showed bitterness, anger, loss. Odd, really as the original showed promise. Anticipation. Love. The man who captured all these strange emotions just thought they were a...

The ghosts of her past continued to haunt her.

The parents she'd disappointed, the boy she'd left behind, even the teacher who had taken her under her wing in the hopes of helping her realize her full potential. She saw them all before her as clearly as the last time she'd seen them. Their frowns, knitted brows, and downcast eyes. She hated those expressions, the disillusionment of their ideals written across them like ink on paper.

How could any of them have known her true potential? And if they had, would they have been heartened or horrified? Knowing ignorance was...

The unsuccessful Pilgrimage by Tobey Wilson

Dear one,
Well, I finally made it, I'm in Spain staring out over Santiago de compostella, i always ment to do this with you. I know you know that and as you can see its beautiful here. I wish the accident had never happened i could feel you holding my hand the whole way i swear it. i could hear you whisper at night and damn it if i thought this would help me i longed for you every night i slept in your bag i could smell you. hear your voice in my ear. Damn it! Why did you...

Over the Edge by Anglea

My email has been compromised, nevermind, nothing I write or receive is of any importance. The girl on the bench was full of self pity, having one of those 'the world is against me' moments we all get when we have too much free time and not enough to do. Usually by choice as usually there is too much that needs to be done but we prefer to surf the internet, read self help, watch tv or simply drink ourselves to oblivion, overwhelmed at the mess we ignore.

Jodie was a successful fantasy fiction writer, had a reliable good looking...

She sat waiting in her normal spot overlooking the city. He said he'd return to her one day, and though it hadn't happened yet, she wouldn't give up hope. He'd always been a man of his word, and a measly thing like death wouldn't change that.

When the accident claimed his life, ripped him from her, she thought she'd find a way to join him in the afterlife. But one thing he said before passing for good gave her hope. "Wait for me." She knew what he meant; where he meant. And so she waited every day for the past...

The darkness was approaching. The reds and oranges of the sunset, creeping together with the blackness that occurs when it's time for the moon. Contemplating life, reaching for answers. Like, "why did I leave home," "how did I watch him pack the car and drive away?" and others. Soul-searching. The sound of crickets, the rustling of small animals. I was scared, but not of my surroundings, just of what my late 20's had become. A joke, a hot mess, a scandal, some lies. I bet that's what people were thinking of me anyway. A job I hated, a life I... 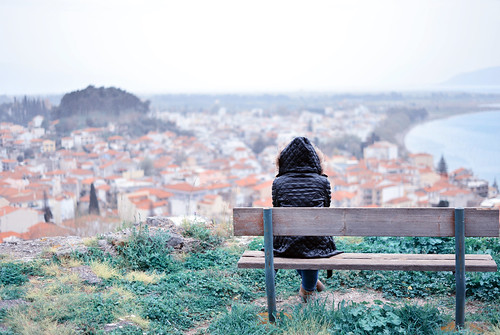 Image by va_sfak:
Write your own story to this prompt Read 8 stories
Originally displayed on:
May 09, 2013