Crap. This wasn't going to be good.

The old man said 'Let's go deer hunting. Just like old times. Reconnect after all those years of you pissing away your life on the other side of the world.'

That was last night. We drank to it. He had some incredible Irish Whiskey. 12 year old. We killed a bottle. I hoped like hell that he'd forget the hunting plans.

My brain was tuning timpani drums in my skull. Like O Fortuna was ramping up. There was a fog over the field that may or may not have been real. As far as targets were concerned, we had a ton of them, but if I had to shoot any one of them I was going to have to pray for blind luck. Focus was not an option.

And the noise. Every hoof-fall on the turf hurt. Every chew of cud was agony.

We snuck up on our bellies, mimicking marines.

And when the shutter on the old man's camera crashed through my skull I emptied my gut.

tony_mcfadden (joined about 12 years ago) 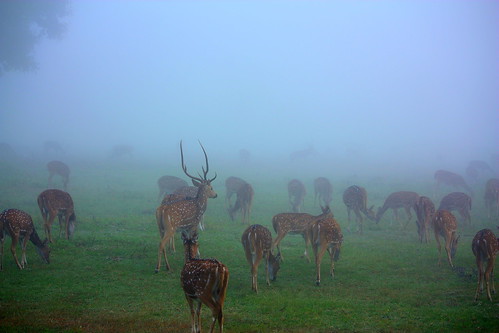 Image by Siddy Lam:
Prompt suggested by Galen
Write your own story to this prompt Read 6 stories