She held the cat tightly in her arms, relishing in the warmth. It was comforting, strangely comforting, how much she could rely on her cat. His name was Alfie and he was her life. However sad it may have seemed that cat was her life.
She carried the cat out into the snow, watching as his eyes looked curiously around, desperately trying to take in all the new sights.
He'd never seen snow before. That's why she'd brought him out in the first place. She hated snow herself. Hated the way it melted the moment it touched her. Hated the way it felt against your her. But most of all she hated the way it crunched when walked on.
But that was just one of things she'd do for her cat, despite hating it.
Brought back to the present by his insistend purring she stroked Alfie roughly, wanting to keep him as warm as possible.
He wasn't paying attention to her anymore though being more interested in staring up at the white snow falling from the sky.
She smiled as his head flicked from side to side, trying to take it all in at once. He was so sweet. She loved him.
He wouldn't leave her. His love for her wouldn't go away.
He was all she had left and she was grateful. O so g

AliceGillespie (joined about 12 years ago) 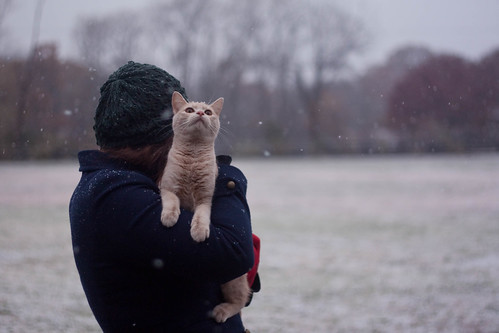 Image by Gibson Regester:
Prompt suggested by Galen
Write your own story to this prompt Read 7 stories