The girls rejoiced. It took them an hour, but they finally found the Moleskine notebook that Julia had so carelessly misplaced. Anna and Rachel spotted it beneath a rock that Julia used to keep the pages opened flat.

Now that the hunt was over, the three girls placed the notebook on the ground and stood around it. They took hold of each other, and began the chant. As they chanted, they began dancing around the notebook, faster and faster, chanting more and more loudly.

A beam of pure white light shot straight into the air and appeared to pierce the clouds; a veil of mist settled upon the trio of witches, and the ground started rumbling and quaking.

Faster and faster still, they spun around and chanted, until Julia tripped, slipped and inadvertently kicked the notebook. The cover flipped closed and interrupted the beam of light.

"Damn!" she shouted, and the three girls slowed down their frantic dance.

I'm running out of time. Damn.

Ok, good, but, what exactly are they trying to do?

theshoes76 (joined about 12 years ago) 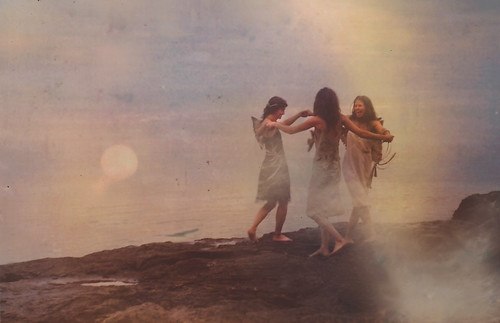