Truck on the Grass by rtperson

When the truck pulled up into the yard, I looked up from breakfast. It was a large truck, sort of a cross between a utility van and an ice-cream dispensary, and its tires bobbed over the curb, causing it to lurch from side to side. It drove right over our sapling, sideswiped the large maple, crunched into the center of our magnolia bush, and finally stopped over top of the fire hydrant, knocking it out into the intersection. I could see the driving compartment fill up with water, and pretty soon thereafter the windshield split off from its frame and smashed onto the street in front of it. My father was out the door as soon as he was sure it came to a stop. I followed after, my fingers still sticky with syrup from my waffles. We opened the door of the truck, and saw a large man gripping the steering wheel, only his head was that of a cat. He turned to us, blinked three or four times with a tired, seen-it-all-before expression.

My father shook his head.

"I hate getting wet." he said.

Gone Awry over 11 years ago

I agree with Galen. Poor plants! That magnolia bush is going to need therapy {and some serious TLC} 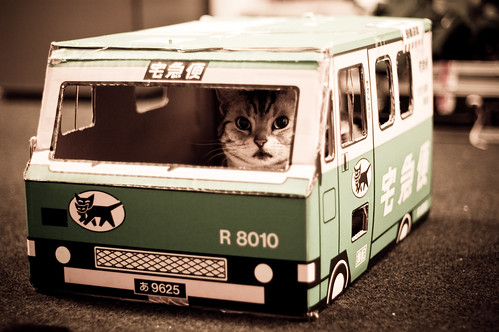 Image by *yasuhiro:
Prompt suggested by Galen
Write your own story to this prompt Read 7 stories