The Simple Things by JuniperJungle

The first few days she hadn't noticed the bars. She'd noticed very little about her surroundings other than that they were wrong. As her head became less fuzzy and she began to understand why they were wrong, that this wasn't where she was supposed to be she tried to learn everything there was to learn about this unfamiliar environment.

It was on the tenth day that she'd counted, that the sun shone for the first time. Whereas it had looked grey and dreary outside, the glowing sunlight made it look full of possibilities. The bars were on the inside of the window, after a painstaking search she found a hair grip lodged in the corner of the skirting board. She left it where it was and waited.

The routine was always the same. Breakfast came and was taken away after a short while whether she'd eaten it or not. Once it was gone she was ignored for what felt like hours. She waited for the footsteps to die away and then fetched the grip. Slowly and carefully she jimmied the window and pushed it as hard as she could.

The fresh air flew at her, she couldn't believe how amazing something so simple could feel. She climbed the bars and reached through them.

Very good! I wonder... why is this girl trapped? 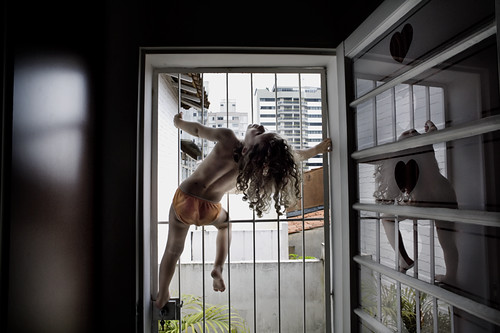 Image by Cia de Foto:
Prompt suggested by Galen
Write your own story to this prompt Read 4 stories