I always felt like I was stuck in a bubble. Like the Pope in his vehicle. On display like the Queen of England. A goldfish in a bowl. Maybe it was my shyness or my wart on my left cheek. Maybe it was the lisp that made everyone return my greetings with a "What did you say?" Maybe it was my slumped back, the hump that made shopping for blazers so difficult.
"Who's in there?" small children would say, peering at me on a Sunday in the park. "Don't bother that nice man," their mothers would say. The mothers were unable to see the bubble, but children can see the things that keep us apart.
"Hey, Mister," said one little boy last Tuesday, "why don't you pop that?"
He pointed to my bubble. Or maybe he was pointing to my wart.
Either way, it worked.

anikawriter (joined over 11 years ago) 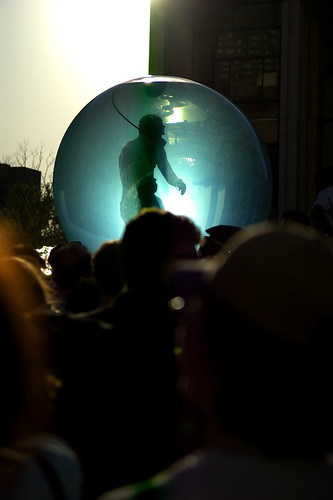 Image by _lmaji_:
Prompt suggested by Galen
Write your own story to this prompt Read 5 stories