The anti-grav boots were worth every penny.

Shelly had saved for weeks, mowing lawns, delivering papers, collecting coins from every cushion in the house, to earn enough hard cash to buy them. Her mother had told her not to waste her money, that they were probably just galoshes with springs on the bottom, but the girl refused to be deterred. The magazine ad had proclaimed them anti-grav, and there was a Truth in Advertising law on the books, so they must be the real deal.

And she was right.

But not in the way she thought she would be.

Instead of high-tech shiny boots with some sort of motor or rocket attached, they were plastic galoshes that sparkled in the sun. She went to the nearest puddle, read the incantation, and hopped-

all the way to the moon.

Luckily, the incantation did provide an air bubble, and with the proper counter spell she landed safely on Earth once more.

She took another breath, and readied herself for another trip. She couldn't wait. 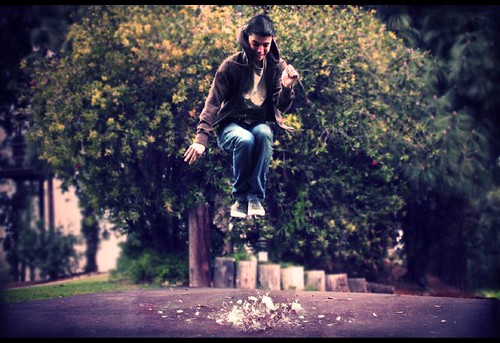 Image by Jane Rahman:
Prompt suggested by Galen
Write your own story to this prompt Read 13 stories