A Morning at The Beach by CraigTowsley

The waves crashed and slapped at the stones, slurping up mouthfuls of sand and dragging them back to the deep. Elk stood out on an outcropping, the letter held tight in his hands. He didn't need to read it again, had read it fifteen times already this morning. And besides that, he wasn't an idiot and knew what was happening..could see the signs pointing at the end.
The waves frothed and slapped at the sand and stones.
But a letter was for cowards. Dash a note and sneak out the back window and then move on with your life.
No closure in that.
The spray speckled his jacket and the letter.
He wiped the ocean from his eyes and tore the letter apart.
The waves lurched and crashed, rose and splashed.
He walked to the end and let the pieces of the letter fall from his hands, slowly.
The waves gurlged and spurt, slapped the sand, almost sounding like they were saying "love me"

Really liked your description of the scene. 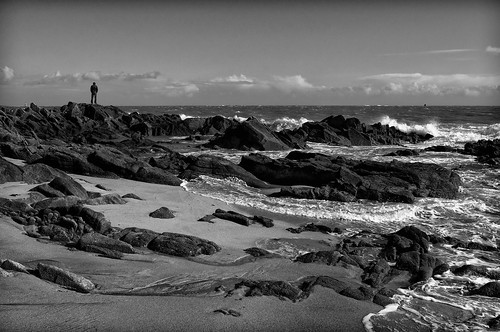 Image by Thomas Leth-Olsen:
Write your own story to this prompt Read 4 stories