He watched in the side mirror as the car got closer and wondered who was in it, what were they doing?

Maybe they were a family on vacation or, like him and his partner, two businessmen on a trip.

No, he thought to himself. They were spies sent to take him and his companion hostage for their new software. His company recently designed a powerful anti-virus program and were likely to take down Norton, McAfee, and the other giants int the industry. So, of course they would want to bring his company down. But, what the men in the car behind him didn't know was that he had backups everywhere. Whatever happened to him, there would always be backups, the software would be sold.

Suddenly, the car closed the distance and began to pass them. He glanced at it as it passed. A man and woman were in the front, two children playing on their iPads in the back.

Maybe they were just a family. A part of the man felt disappointed. He always did let his imagination run away with him. 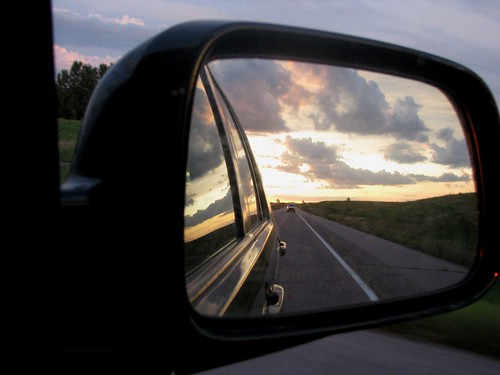 Image by Arthur Chapman:
Prompt suggested by NYgirlLovesCA
Write your own story to this prompt Read 3 stories