Everyone's a joker, until the joke's on them, thought the fish. Swimming in the fluorescent green waters was hell on the eyes, which they could never even close by the way. Just because a bloke swam in his own feces didn't mean he needed to be the butt of every little orange-finned wiseguy that happened to be dumped into their river. Who did he think he was anyway?

The boy that had dumped the little orange fish had left in a hurry. Probably glad to be rid of the little bugger, honestly. The fish swam up to the orange monstrosity, the more-so because he stood out against his glowing green rivals in the viscous water. The intensity of the hatred of his fellow fish must have gotten the better of the little fellow, because soon he was laying belly-up, surrounded by the lime-colored population of the river. They thought it served him right.

Meanwhile, the factory continued to dump its waste unchecked, breeding not only new, resilient species of water animals, but unknowingly spelling the future doom of humanity. 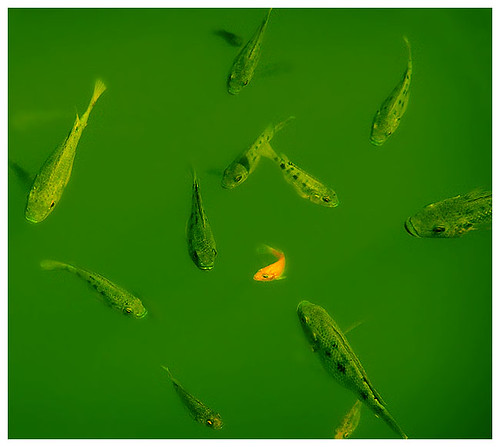 Image by Riza Nugraha:
Prompt suggested by Galen
Write your own story to this prompt Read 7 stories