Pucked Up by ganymeder

Puck looked at the watch and pondered on the nature of time.

It was almost as fickle as he was.

What marriage - or a good binding spell brought on by too many intoxicants and a serious lack of judgement - had bound together, time would tear asunder. At least it would if Puck had anything to do with it. Robin Goodfellow was not a fairy that would remain tied by one woman for long, no matter how fun that bondage might be.

Buttercup lay frozen on the bed, a beautific smile lightened features that would otherwise have appeared harsh in the early morning light. No, who was he kidding? She looked angelic, no matter how much spandex she was wearing. Still, if he was bound by the terms of her nefarious binding spell until "the end of time," then didn't casting a spell to stop time cancel things out? Puck liked it when things worked out neatly, especially after making things such a mess. Of course, making a mess was half the fun...

Puck put down the watch, removed the magically binding wedding ring, then stood over his lovely bride. He'd make the bitch pay, but there was no reason it couldn't be fun for them both. He pressed the button to restart his watch and gazed down at his blushing bride as she opened her eyes. 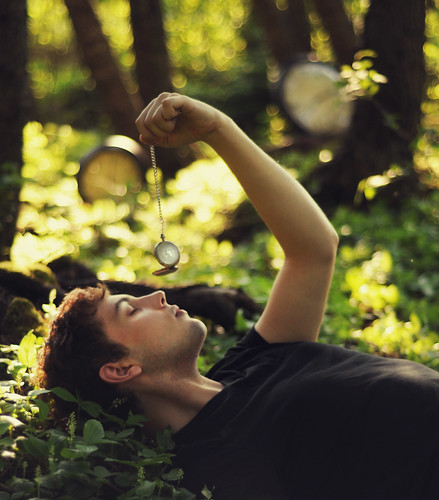