I don't know what to say. The image was... IS astouding, but other than that, nothing. What do I see? A lonely figure on a windswept beach, but not one of sand, no, one of bright colors and soft, sculpted rocks. The ocean is so close, yet because the sky matches the color of the water, the sea seems to go on forever, endlessly rolling through the heavens, the white waves becoming clouds creasing the sky as they travel through the heavens. It's daytime, yet not as bright as you would expect. The clouds mask the sunlight, dimming it, not to a gloom but subtly altering its course. The ocean's blue seems silver, the sky's azure seems muted, not the harsh garish brightness of a summer day but the lesser, more open light of an autumn twilight. What could that lone figure on the beach hope to accomplish in the mud and rocks beneath that barren light? Is she worshipping at the altar of Mother Nature herself? 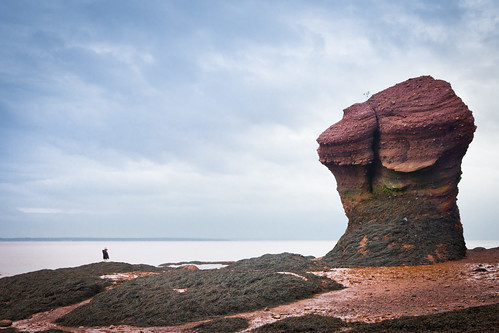