Alfred Cappachino looked out at the swirling mass of humanity, a stupid grin plastered to his face to hide his abject terror. Which one of the lovely women in the throng was his blind date? He adjusted his spectacles for the umpth time, then reconsidered and pulled them off, wiping the lenses on his shirt before returning the accessory to the bridge of his nose. What did she look like? All he knew was that she'd be wearing a 'geeky' t-shirt, whatever that meant. Geek was chic now though, right? Hence, his glasses with the clear frames, his strategically-parted hair, and his new dating ensemble- complete with pocket protector. He didn't know if Geek Chick went THAT far, but he hadn't been on a date in eons and he wasn't about to take chances. He'd even watched some superhero movies as homework.

A petite blonde with a pixie cut, wearing a t-shirt with the number 42 stenciled across in large red letters, crossed his line of vision. She adjusted her glasses, almost identical to his own, and scanned the room. "Excuse me," she said, "Are you Alfred?"

The bronzed and muscular man next to Alfred took in the woman's appearance, the number on her shirt, and said in a surprisingly sophisticated accent, "Why yes, I am, my dear. However, I still don't know the question!" He nodded knowningly at her shirt.

She gazed up at the towering hunk before bursting into laughter. Then they joined arms and walked out of the building into the sunset, leaving a distraught Alfred in their wake. 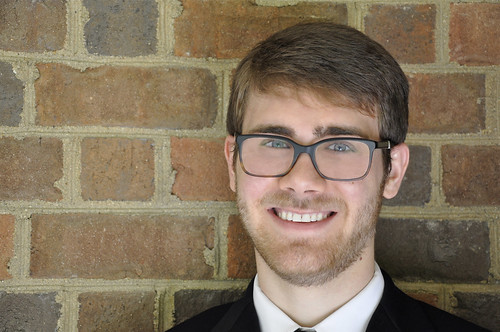 Image by miranda.granche:
Write your own story to this prompt Read 4 stories