Dad showed me the picture of the orangutan splayed on the grass.

A monkey, I said.

Neither of us laughed.

Remember that time you asked me for a Coke and I stood at the soda machine filling it with Root Beer imagining Homer Simpson saying Mmmmm Root Beer?

It's silent most of the time now. I don't think to text and neither does he.

"Clung to" means everyone in the house knowing when I am there and when I am not. A friend is dropping off some cookies she made for me, I say to Mom and she pauses and says, What friend? Is this someone stalking you? Why would someone bring those?

She tries to let me leave but the same pause remains whenever I step outside of the house with someone else other than the approved list of acquaintences or family. She WANTS me to be free but she pauses...

I don't have friends, I told her, once.

You don't need them, she replied. You're safe here. You are so safe.

It makes me think of the time we spoke of War Crimes in another land and the tools soldiers use to terrorize civilians.

I'd fight or run, imagine surviving that, I say.

I'd cut your throat, mom says. That way no one hurts you and you don't have to survive and God will bring you back later anyway.

That terrifies me more than the thought of soldiers.

You going away again? Dad asks, one of the rare times we're sitting together. You running away for 3 months again?

When I have the money I will, I say.

Why do you even come back? Says Dad who rarely ever sees me.

I run out of money I say.

I only feel safe when Dad pushes me away.

ganymeder about 6 years ago

This was really disturbing. I got chills. 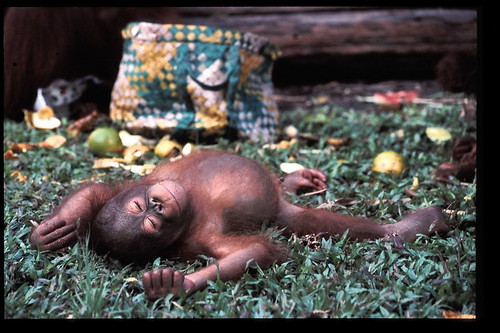 Image by belgianchocolate:
Prompt suggested by Galen
Write your own story to this prompt Read 5 stories