Gilbert and his Goma by BrianUrinal

One day a man called Gilbert played with small electrical appliances, he named this activity "duckery". He played so much his fingers became paranoid. This paranoia soon ran from his fingertips straight to his heart. After a couple of weeks he noticed a strange, yet, comfortable feeling in his upper right shoulder, he called this "proper". Proper became so "happening" that he made up words like "happening" and "bloodthirsty". But things started to take it's toll on poor old Gilbert. He lost his confidence in playing with small electrical appliances. He became depressed and fell in a coma, he named "Goma" which he liked, very much. He soon fell in love with this Goma, and used her to break free from his depression. From playing with electrical appliances, to becoming depressed. He found his true love and was forever gripped with this Goma. He married in the next few years and had son who was a microwave. They feed him carrots and also Gilbert fed him the rest of his upper right shoulder. Happy Gilbert.

BrianUrinal (joined about 12 years ago)

Wilf Duggan - student filmmaker from the UK, likes having a laugh and drawing a graph. 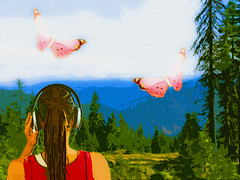