3. Oh to drown in ones finest. by X-Himy

Oh to drown in ones finest. Her shawl spread around her like tentacles, the pearl necklace, restored to its natural place shimmered under the sodium lights as the diaphanous skirt became squid-like. To prepare for this moment, to understand that you will be suspended in front of hundreds, thousands on a good night. Perhaps there is no better way to die than in front of an adoring gaze.

There would be no death of course, no final throes, no panicked look. The calmness of the water as she let herself go limp, felt herself carried by the eyes of the people in the seats, it suffused the stage. And James in his black finery, to contrast her white dress and to make use of the shadows, stood there. He gave her a wink, it was diffused through the curved glass of the tank as she arched her back.

He took a few final moments to allow the effect to soak in. And with a snap of his fingers, he disappeared. His greatest trick yet, and she had never seen it coming. The audience, rubes that they were, thought it was all part of something planned, but as she felt the panic wash over her, she wondered if he had always known. The stagehand was so young, so strong. And she was always dying, what was once more? 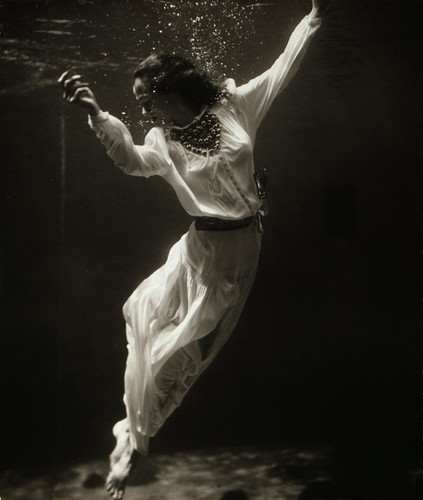 Image by Library of Congress:
Prompt suggested by PewterWolf13
Write your own story to this prompt Read 18 stories