the infrastructure required to support shrines to Ourselves; 14 billion dollars to preserve This Moment by 110

There's nothing like being in a parade to let people abandon their sense of self and do things that make them appear foolish to outsiders.

You may have seen this as a child and thought nothing of it. You may not have even noticed the people, marching lockstep, standing on top of highly embellished vehicles, or pulling desperately to prevent enormous cartoon characters from flying away. You may have just been taken in by the symmetry, music, and good cheer of it all.

Now, as an adult, there you are, dancing like a fool in full view of the entire world thanks to the magic of the internet. The good times you allowed yourself to slip into are gone, and your security profile has even been modified automatically by a government computer, since you're flanked on both sides by people wearing masks that symbolize anarchy.

Speaking of symbols, you could be a poster child for the 21st century. Forgetting how foolish we'll appear to future generations, or even to humans on other continents, we spend millions onf

Gone Awry about 10 years ago

This is a very good story. Question: what are the last few words? 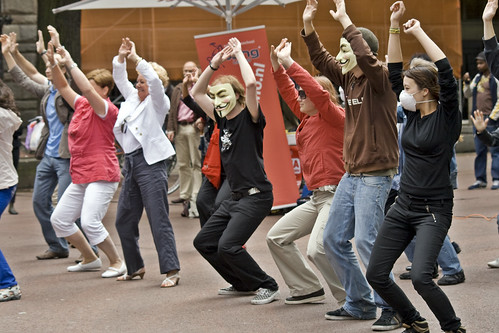 Image by Henk de Vries:
Prompt suggested by Galen
Write your own story to this prompt Read 7 stories