We have been in the bunker for weeks now sharing a room with me and my five brothers. Its hard to imagine our life before the war, in a nice large house with lots of nice food. Its my birthday tomorrow im the youngest , im turning 5. I learnt to read and write when i was 2, i was an advanced child , my parents used to believe i was a prodigy, they tried to make me learn thing like piano and violin, things that take lots of concentration. I failed at violin but i went well with piano...

these last little fires by my.mind

If I were a scientist I would invent a drug, which could bring me back to all of the feelings I was able to experience in my childhood days. These days, when my imagination was so much more powerful than reality. I miss the ability of completely dreaming away in an innocent way. Childhood is a friend to me, who passed away long ago, but left me with so many colorful memories, that I will never be able to forget about it or accept the fact that childhood's something irretrievable.. Never.

I guess, these thought is one of these last...

Leo was a Lion by mroshaugh

The Bronx Zoo in my mind was empty. Maybe the gazelles were milling around Yankee Stadium, waiting for Catfish Hunter. The green grass of memory, my synapses folding in the sweeping July breeze, beheld the sweet roots of my birthday candles, climbing the kitchen air like lithesome monkeys, nimble as the imagination.

One candle, six stories by alexandergreenb

Contemptlation of the one. The flame at the center of life. Beginning and end. No beginning, no end.

The children huddled around the flame, discussing what was to be done. One suggested that the only possible route was violence, the violence of the oppressed masses against their oppressor. Another suggested that they might take more subtle means of gaining control of the classroom, gain partisans. The teacher came in, and they blew out the candle, acting as though nothing had happened.

Every child around the cake wished that it was his birthday, that he could be the...

Charles didn't know what to think. The heat on his cheeks hurt too much, but he didn't like it when the flame disappeared. Jenny was the one holding the camera. She told him that they could all share the candle. It was one flame for the entire group. A moppet party, dad called it, because it was not their birthday.

Mom was sick. Charles could only think of that. She'd pale cheeks and skin stretched over her face, and her hair tangled and black and her mouth a gaping, gawping hole. She didn't even recognize any of them when they'd... 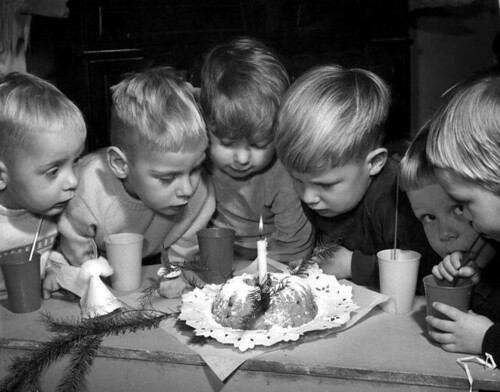 Image by Nationaal Archief:
Prompt suggested by Galen
Write your own story to this prompt Read 5 stories
Originally displayed on:
August 12, 2010