Something of Value by DoctorMikeReddy

"It is here. Start digging." the large man pointed with his hat.

"How do you know? What is this treasure?"

"Dig, or I will kill you where you stand. And then it will have to be a larger hole to put you in."

"You could kill me anyway." the small man said.

"If the treasure is as valuable as the spirits say it is, I think we'll both get what we deserve, coward. That is what they promised."

And so the snivelling man dug until there was a large hole. When he declared he had found something he was pushed aside by his captor.

"What is it?" the larger man cried.

"My courage." the small man whispered, striking his captor with the spade. The spirits were right. They had found something of value.

Thank you. This was one of those stories that come complete in a dream. 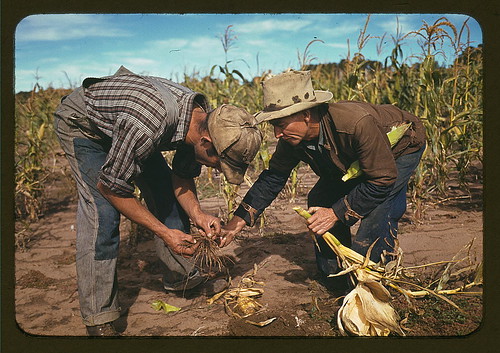 Image by Library of Congress:
Prompt suggested by Galen
Write your own story to this prompt Read 4 stories