She was walking down the sidewalk in the downtown area of Seattle when she noticed a pile of white blankets and other pieces of cloth laying haphazardly on the right side of the sidewalk.

When she approached the bundle of the white blanket and other cloth, she briefly felt for it, thinking that there could be someone sleeping or even a dead body that was either abandoned, or may have died from an illness related to the recently unbearable heat.

However, she found that no one laid in the blankets, made obvious by the way that it was just tossed to the side, like one would do when they were fixing to get out of bed in a hurry in the mornings.

Perhaps, maybe, whoever had slepped there may have left for some reason, a d would return later. 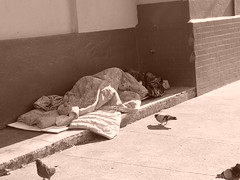 Image by Franco Folini:
Prompt suggested by Galen
Write your own story to this prompt Read 19 stories